I call these three guns "Top Shelf" because I believe that they are the best examples of each of the three most common firing platforms (DA/SA, SAO, and Striker) for concealed carry.  After modifying and upgrading all of my other carry guns, I came to the conclusion that I really wanted to have a set of guns that have a minimum amount of modifications so that their potential reliability is as high as it can possibly be, while being outfitted with high quality accessories to maximize their performance and functionality. All three of these guns have Trijicon RM06 optics, tritium night sights with my DIY Hi-Viz front sight modification, and Olight PL-Pro rechargeable weapon mounted lights. They all share the same custom kydex holster that I made that indexes on the light rather than the gun, or I can easily remove their weapon mounted lights and use them with the non-light bearing holsters that I made for each individual gun. 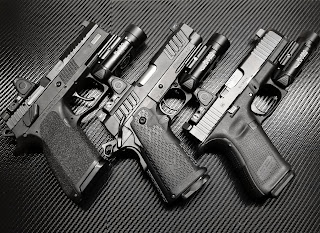 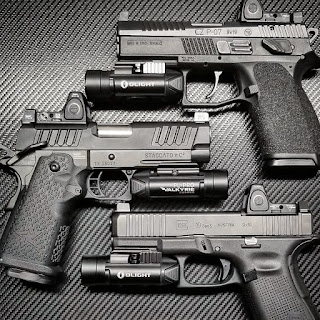 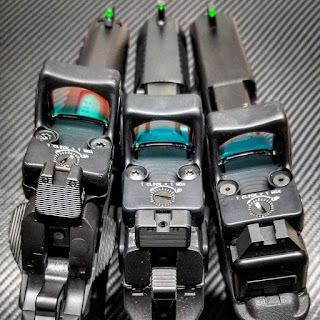 CZ-USA P-07
The CZ P-07 is my all-time favorite carry gun.  If I had to choose only one gun to do everything, the P-07 would be the gun I would pick.  Out of the box, the double action trigger pull is a little heavy, but that can be easily and inexpensively improved by installing a self defense spring kit and a few other small items from Cajun Gun Works (around $35 total) to lighten the double action trigger pull and increase the overall reliability of the gun.  There is not an optics ready version of the P-07, so I sent the slide to JagerWerks to have it milled for an optic. The only thing that I don't like about the CZ P-07 is the lack of usable texture on the grip, so I textured the grip on this one myself to give it a better feel without being too aggressive for concealed carry.  In my opinion, the double action first trigger pull makes this the safest option for defensive use and concealed carry, especially when carried in the appendix position as I do every day of the week. 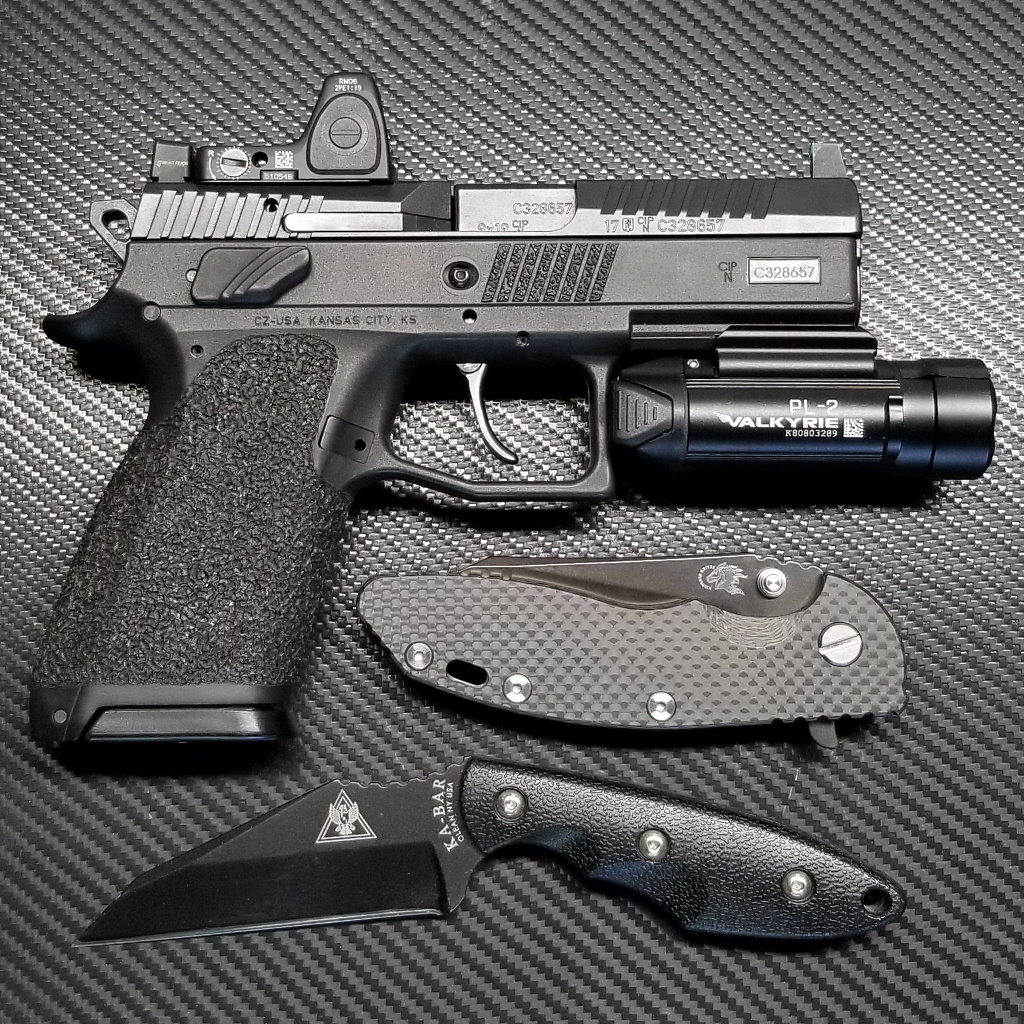 STI/Staccato C2 2011
This gun is brand new for 2020. I started out with and have always loved 1911s, but I've never been comfortable carrying one for defensive purposes on a regular basis because of their low capacity.  I've looked at various high capacity compact 2011s in the past, but I was never completely happy with their aesthetics or lack of features, especially when paying more than $1500 for one.  When STI unofficially announced the new Staccato C2 in December 2019 and posted pre-production photos of it on Instagram, I loved everything about it and sold all of my compact 1911s to fund the purchase.  The Staccato C2 is offered in a standard version for $2000 and an optics ready version ("DUO") for $2500. I was originally going to buy the DUO version and just mount an RMR on it and be done, but I ended up getting the standard version and sent the slide to Vulcan Machine Werks to have it milled for an RMR using Trijicon's 1911/2011 specific mounting plate that Vulcan includes with their milling package for $400. After doing a little research, I realized that the Trijicon mounting plate allows the RMR to sit slightly lower on the slide than the DUO mounting plate, and the Trijicon plate also comes with co-witnessing front and rear tritium night sights (I prefer tritium night sights on all my carry guns).  With the DUO version of the C2, you have to purchase the RMR specific mounting plate separately (an extra $140), and it only comes with a black rear sight and a fiber optic front sight, so I would've had to special order tritium night sights (an extra $110). Having the standard version slide milled for the Trijicon plate made more sense to me and it ended up saving me over $300 vs buying the DUO version and having to buy all the extra parts.

UPDATE: As of late May 2020, the Staccato C2 DUO is now available in a "Tactical" version that comes with the RMR specific mounting plate and matching co-witnessing black/fiber iron sights, so apparently STI realized it was a bad idea to charge extra for the additional parts to mount an RMR on their optics ready version of this gun. I still have no regrets for going the route I did though, as the DUO version of this gun was simply not available from dealers until May of 2020 and it still cost me less money to have mine milled. 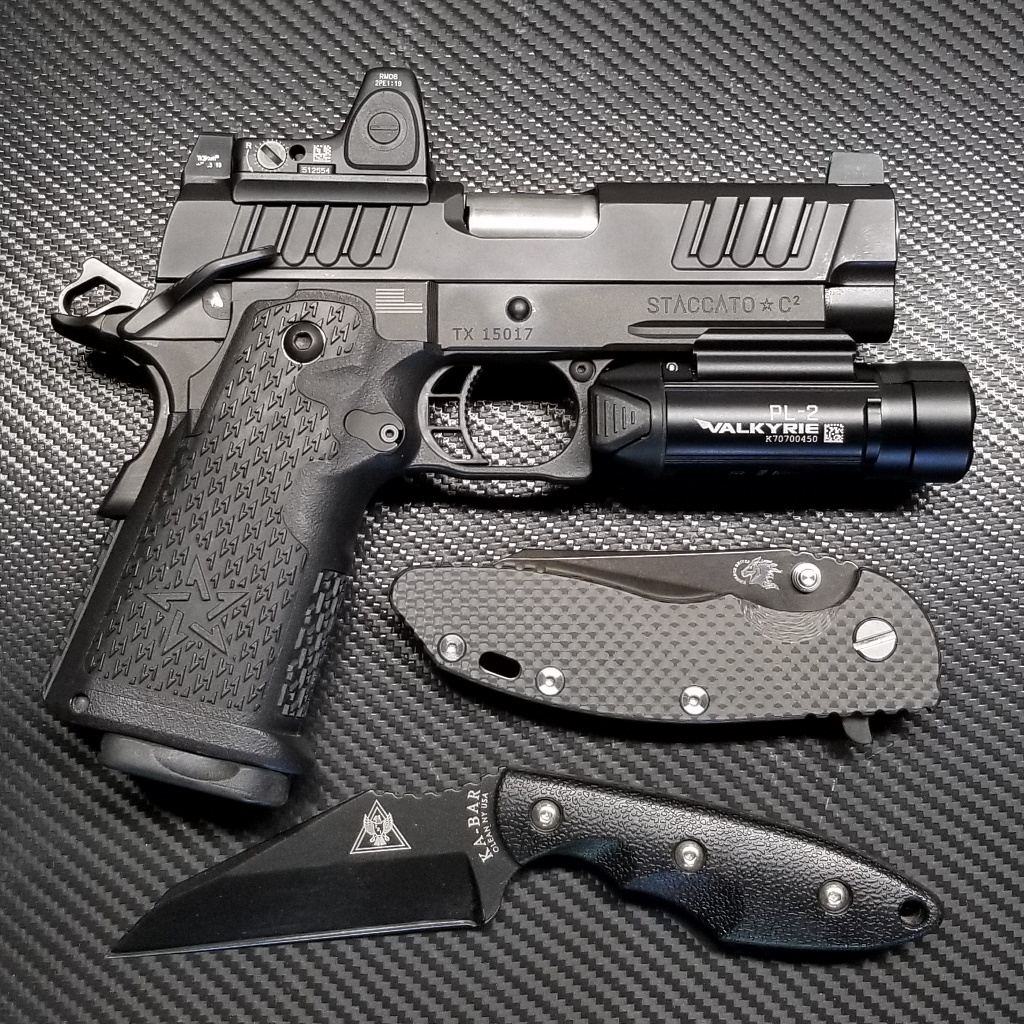 Glock 19 MOS Gen5
There is no denying the Glock 19's reliability track record and the availability for aftermarket parts to improve and customize the gun, but if you go too crazy with aftermarket parts then you can possibly reduce it's potential reliability.  The Gen 5 has a really good trigger out of the box, so the only thing I've done to it is install a 3.5# connector and a medium striker spring from Lone Wolf (around $20 total).  The Gen 5 is also the best looking Glock 19 ever produced, in my opinion, which is great for people like me who also like guns to be aesthetically pleasing as well as reliable. The factory frame texture on the Gen 4 and Gen 5 is more than adequate for a defensive gun, but I always re-contour the bottom of the trigger guard on all my Glocks to make it more comfortable on my knuckle, and I enlarge the interior of the trigger guard slightly for safer use with gloves.  I also modify the medium beavertail backstrap by cutting off the bottom half to give the gun a more natural point of aim with the re-contoured trigger guard, so the grip angle is more similar to a CZ or a 1911/2011. I went with the MOS version for simplicity which also comes with front serrations on the slide as a bonus.  I used the CHPWS V3 mounting plate for the RMR instead of the OEM MOS mounting plate because it allows the optic to sit slightly lower on the slide and it has much better thread engagement on the mounting screws. As with all of my Glock handguns, I've also installed a Striker Control Device from Tau Development Group as an added measure of safety when carrying and holstering the gun in the appendix position. 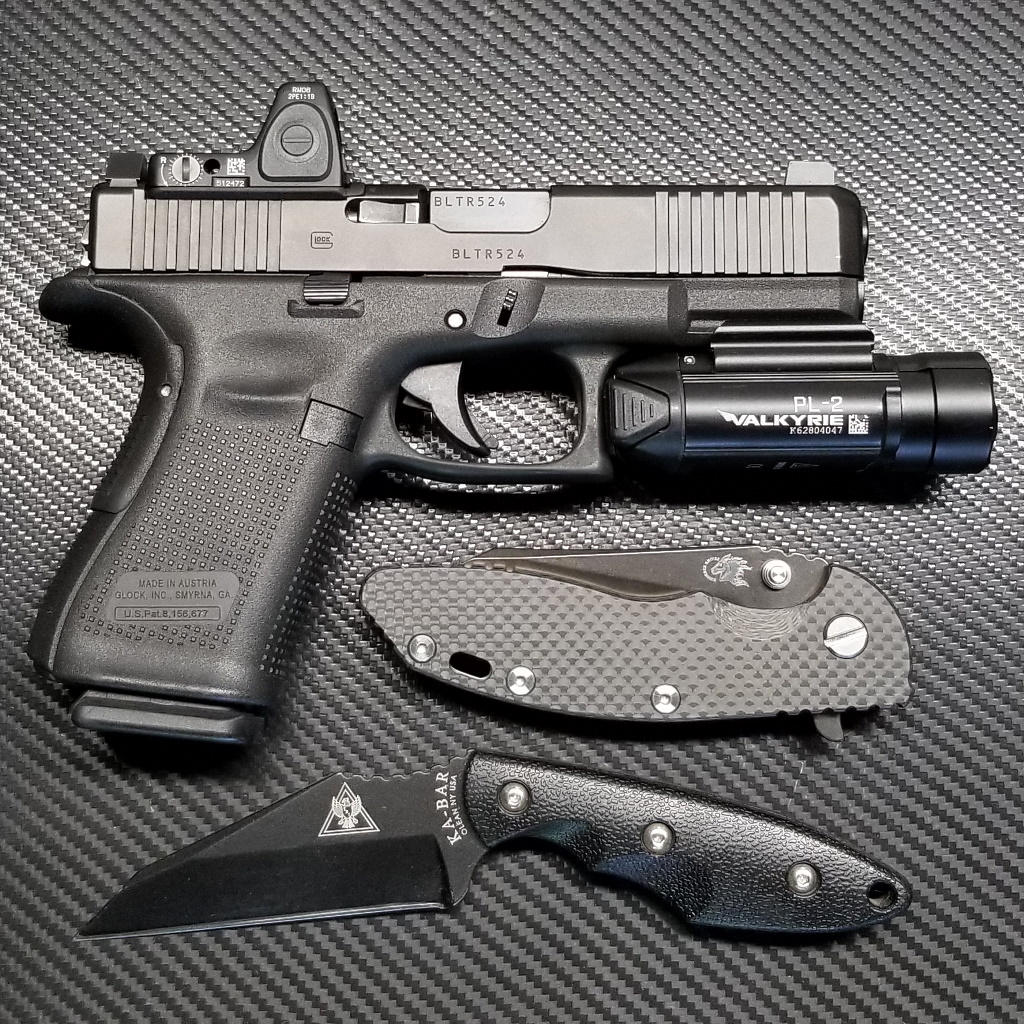 A Word On Olight Products
There are a lot of Olight haters out there that want to argue that their products are not high quality because they are made in China (what about the Holosun optics that are so popular these days?)... everyone is absolutely entitled to their own opinion, but I have not had any issues with any of mine and the light output is great for what I use them for. To be honest, I wasn't a fan of Olight products until I decided to buy one and give it a try.  I was impressed with the overall quality of the light and ended up buying several more to put on other guns. If I'm being completely honest... I typically use full-size pistol lights more as a frame weight than as an actual light.  The fact that the "frame weight" also produces a good amount of light at the flick of a switch is just a bonus for me. I have several Streamlight TLR-1 HL lights and even a few Inforce APL and APLc lights on various other guns. I love the light output of the Streamlights, but I prefer the switches on the Inforce lights which have less than desirable light output.  The Olights have switches similar to the Inforce lights, great light output like the Streamlights, and I actually like the aesthetics of the Olights. Surefire undoubtedly makes excellent products, but I refuse to pay $300 for a pistol light for a concealed carry gun as an average citizen. "But you paid top dollar for the optic, so why not the light?"... because I rely on the optic for every single shot that I take. I simply don't have that same dependency on a pistol light. I'm not a door kicker or an operator, so the chances of me actually having to use my pistol light in a serious situation are very low, and I always carry a good handheld light.  If I carried a gun for a living (military, law enforcement, security, etc.) where the use of a pistol light in a life or death situation was much more prevalent, then I would absolutely spare no expense. If you think that my choice of a pistol light for these guns is going to get me 'killed in the streetz", then what about all those people who choose not to use a weapon mounted light at all?  Are they all doomed to die a horrible death because they didn't buy a Surefire X-300 for their guns?!?! 😲😜😂  Regardless of the popular opinion, I am perfectly happy with the Olight products I have chosen for my personal preferences, budget, and intended usage. If I end up having problems with any of them in the future, then I will just get them repaired under warranty or replace them like I would with any other firearm or non-firearm related product.
For more photos and specs on all of my guns, visit my website here:
http://www.brazeauracing.com/firearms/index.html
Posted by Chuck Brazeau at 4:34 AM