Video from today's USPSA action pistol match. This was my last USPSA match for 2014. I was shooting my new EAA/Tanfoglio Witness Elite Limited "Custom" in .40 S&W for the first time, and had a few unexpected malfunctions.  I had one light primer strike on the first stage, which I can resolve by installing an extra long firing pin. I also had a few unexpected slide lock backs on the third stage, which I discovered was my support hand barely touching the slide lock lever due to the thinner grips on this gun.  I can resolve this by simply altering my grip slightly, which is what I did for the 4th and 5th stages, and didn't have any issues (I have since changed the grips to Henning contour grips with grip tape, which are slightly thicker than the Xtreme grips that were on the gun). Unfortunately, I also shot a couple of "no-shoot" targets on a couple of stages which hurt my overall score (placed 4th out of 7 total). :-(  I still had a lot of fun despite the malfunctions and no-shoot hits, and the weather was perfect for mid November! :-) 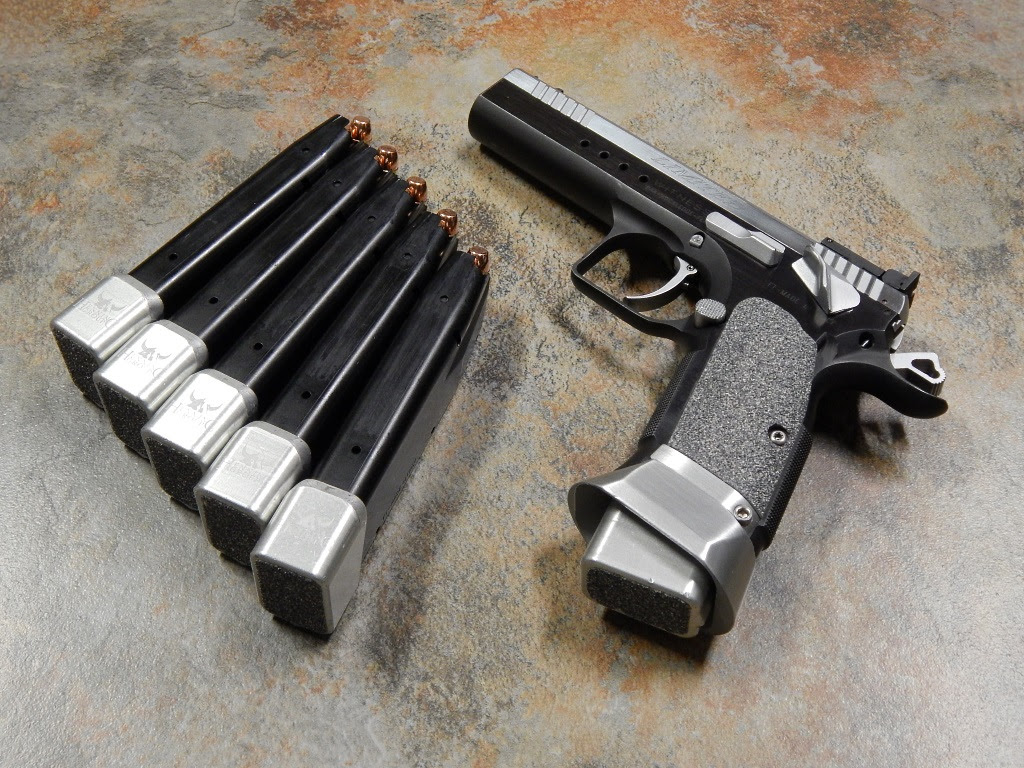 Here's my video footage from yesterday's IDPA action pistol match at Amarillo Rifle and Pistol Club. I felt like I did pretty good with the new gun and gear (placed 2nd out of 8 total).  I had a few bad shots, but no procedural penalties, so I was happy with my overall performance. 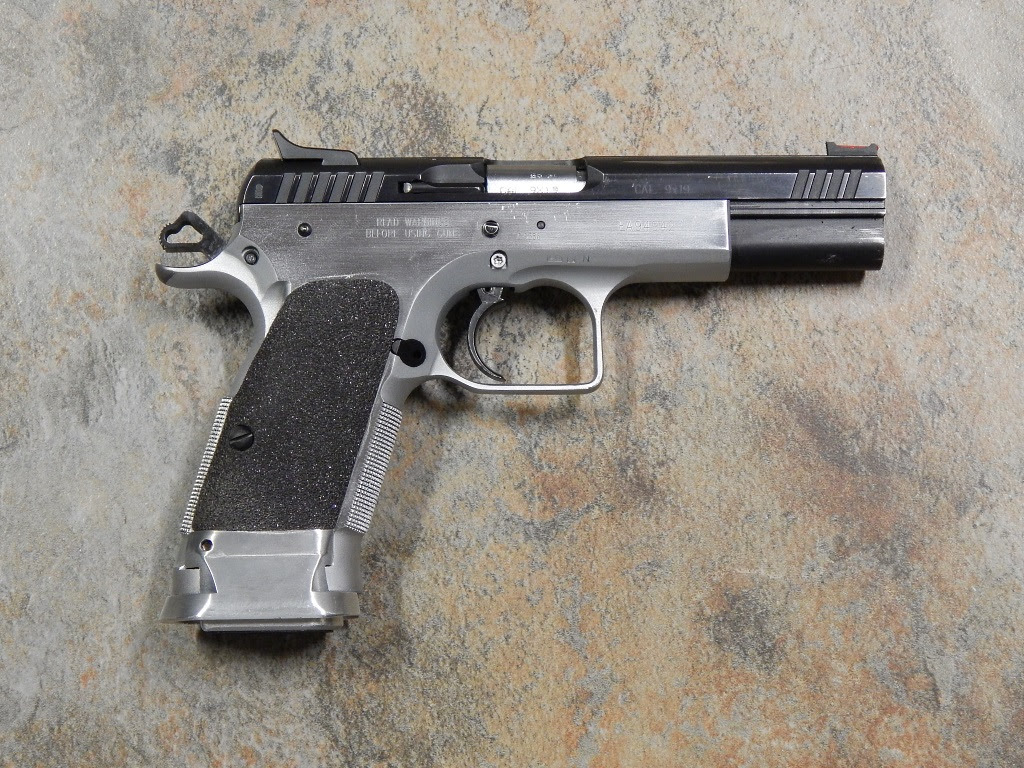 EAA/Tanfoglio Witness Elite Limited Pro
Posted by Chuck Brazeau at 6:39 AM No comments:

I already have two EAA/Tanfoglio handguns that I use for action pistol shooting competition, but I recently came across another one that caught my eye.  This gun was put together from parts left over from a custom gun that someone had built from parts and pieces of two different guns.  It consists of a Witness Hunter frame (same as a Limited frame, but with a blued finish instead of hard chrome) and a Witness Stock III top end in 10mm.  Together, the parts create a blued Witness Elite Limited with a straight barrel instead of a bull barrel (I'm calling it a Limited Custom).  It also came with a factory magwell and some Tanfoglio Xtreme aluminum grips.  I think the blued frame and silver grips and magwell is what appealed to me so much because it resembled the Tanfoglio Limited Custom Xtreme which was not available in the USA until recently.  I added a Henning competition magwell that I had previously purchased,  a Dawson Precision fiber optic front sight, and also added a silver hammer and controls to complete the look of the Limited Custom.  As much as I liked the way the Xtreme grips looked, they were too thin for my preference, so I replaced them with a set of Henning smooth contour grips covered with gray grip tape. I also installed a .40 S&W barrel which drops right into the slide without any modification or tuning. After playing with the gun for a bit, I swapped the hard chrome .40 S&W top end from my Witness Limited Pro, and I REALLY like the way it looks in reverse two-tone! :-)  So, now I have three Witness competition handguns with all three top ends switched around. I'll be using this new gun in USPSA's Limited Division, and will use my Witness Elite Match as an alternate/backup gun. 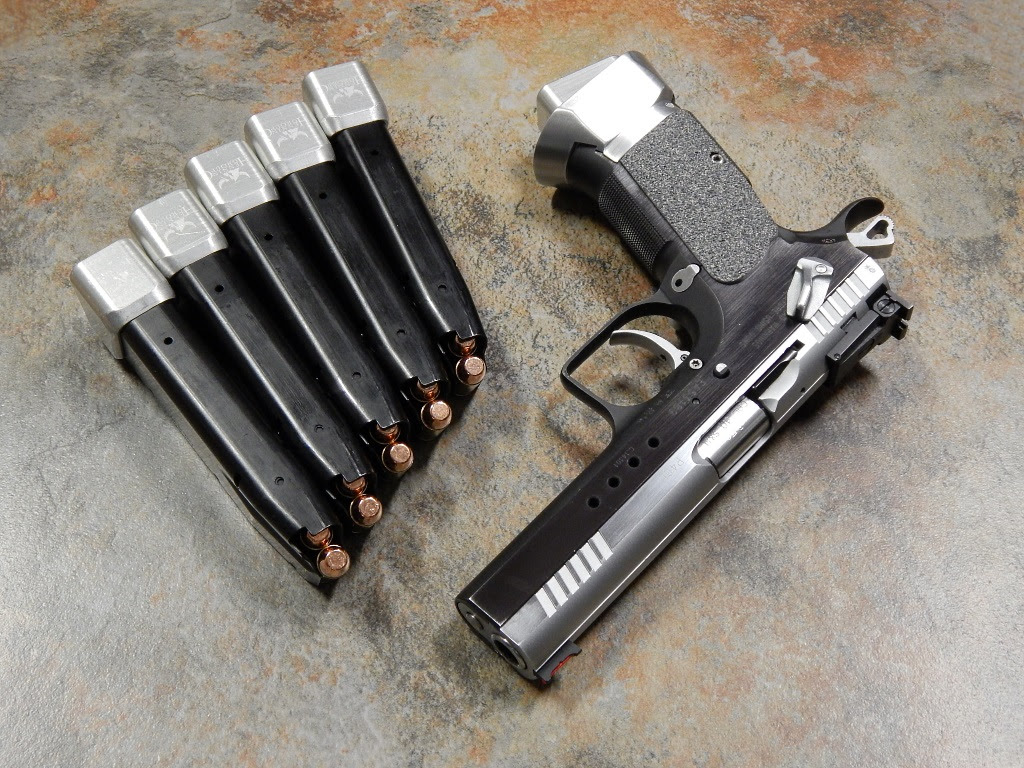 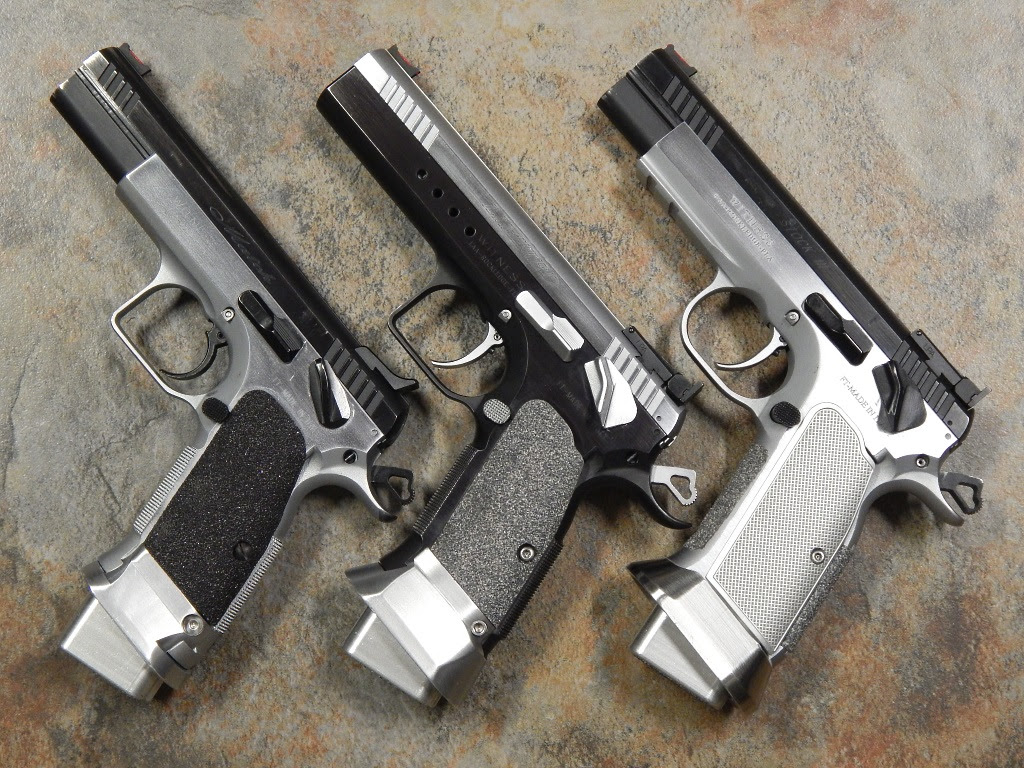 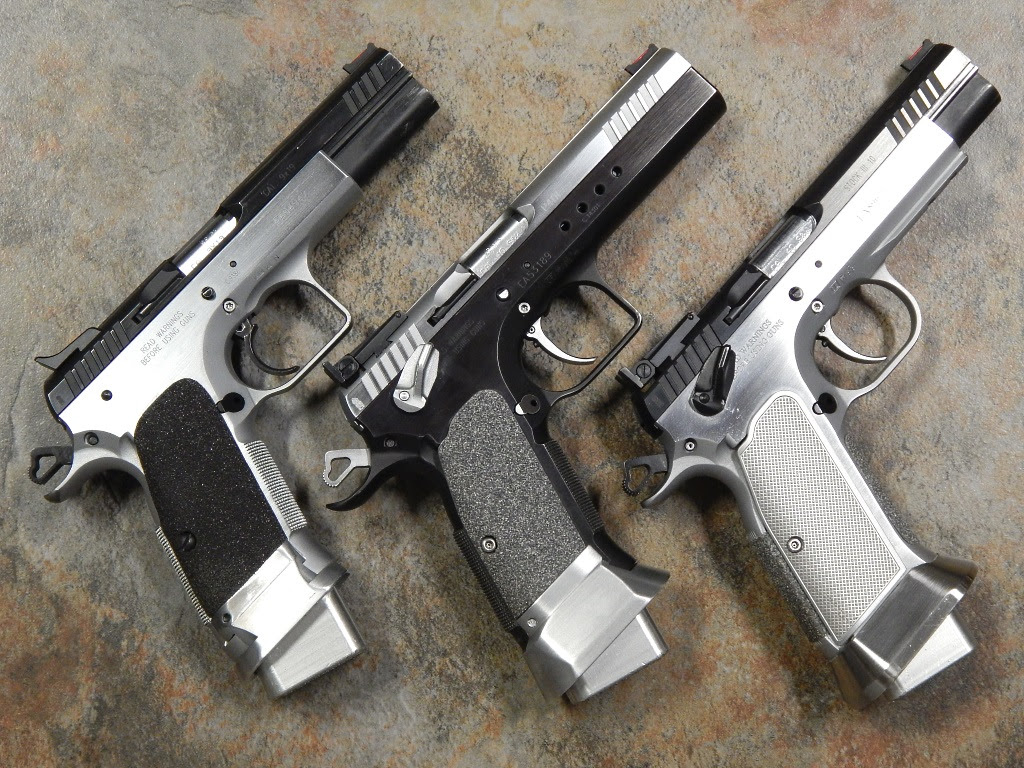 I recently picked up a new CZ-USA P-07 9mm compact handgun for my daily carry rotation. I traded in my Springfield Armory XD-9 for it, because I just simply did not like the XD-9. The grip felt awkward in my hand, and the gun was not very accurate compared to my other 4" guns. Since I shoot multiple EAA/Tanfoglio handguns in competition that are essentially CZ-75 clones, I thought it would be nice to have a polymer CZ gun for carry. I was able to get a post-2014 version which has all the updates from the new full-size P-09.  Even though I already had a laser sight for the gun that was installed on the XD-9, I decided I wanted a laser/light combo unit after attending an indoor "zombie" pistol match where the stages were low light or no light. I went with the Crimson Trace Railmaster Pro unit because it was very compact, and I can actually carry it concealed IWB with my modified Blackhawk nylon holster that is made for laser equipped handguns. I also purchased an extended magazine base pad from CZ Custom Shop for home and range use that increases the magazine capacity from 15 rounds to 20, and I installed a longer regular length barrel from a P-09, which I had threaded for the cool factor. Although I usually carry the gun with a regular base pad magazine, it is still surprisingly concealable with the extended base pad. I am extremely happy with my CZ P-07! 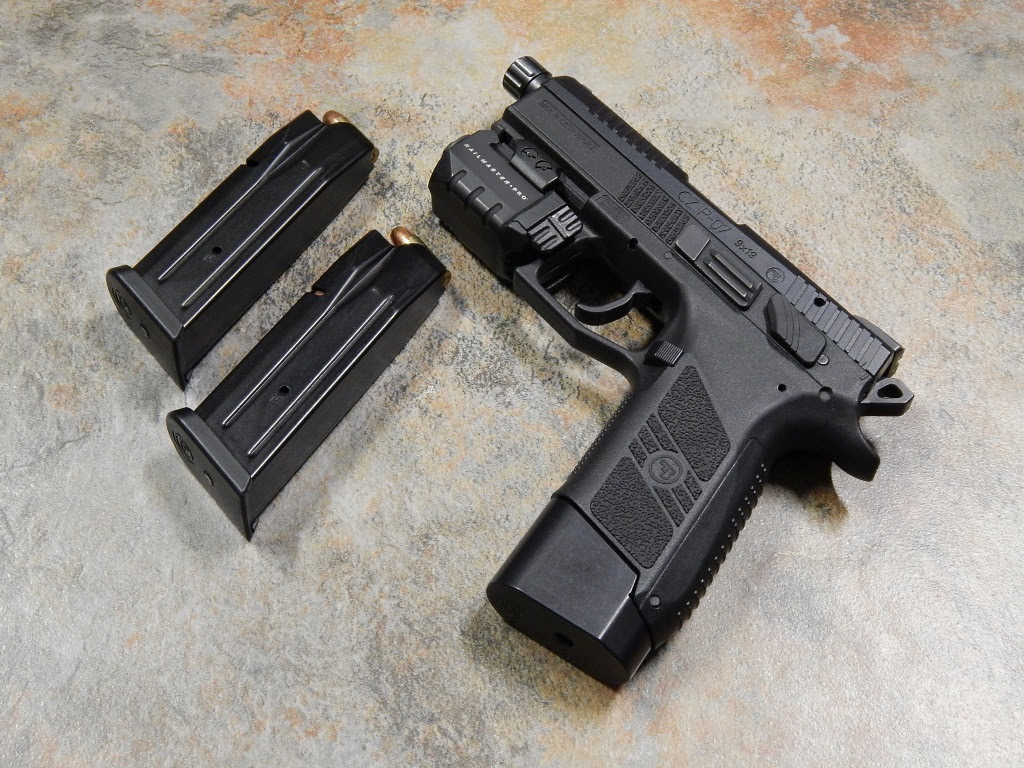 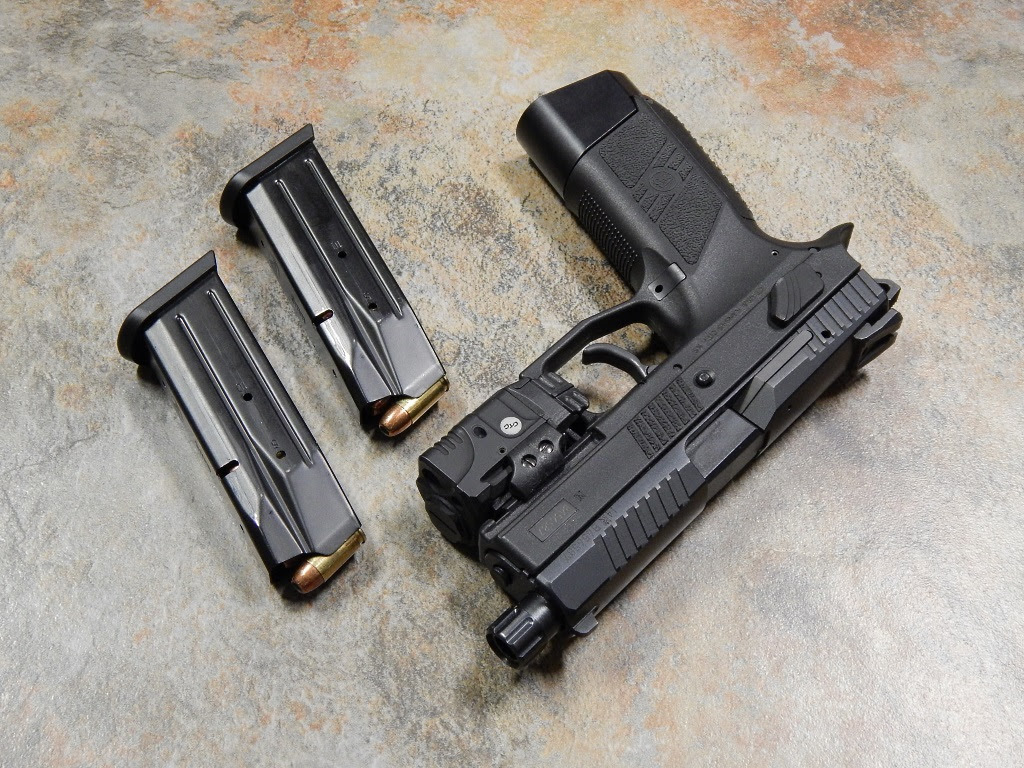 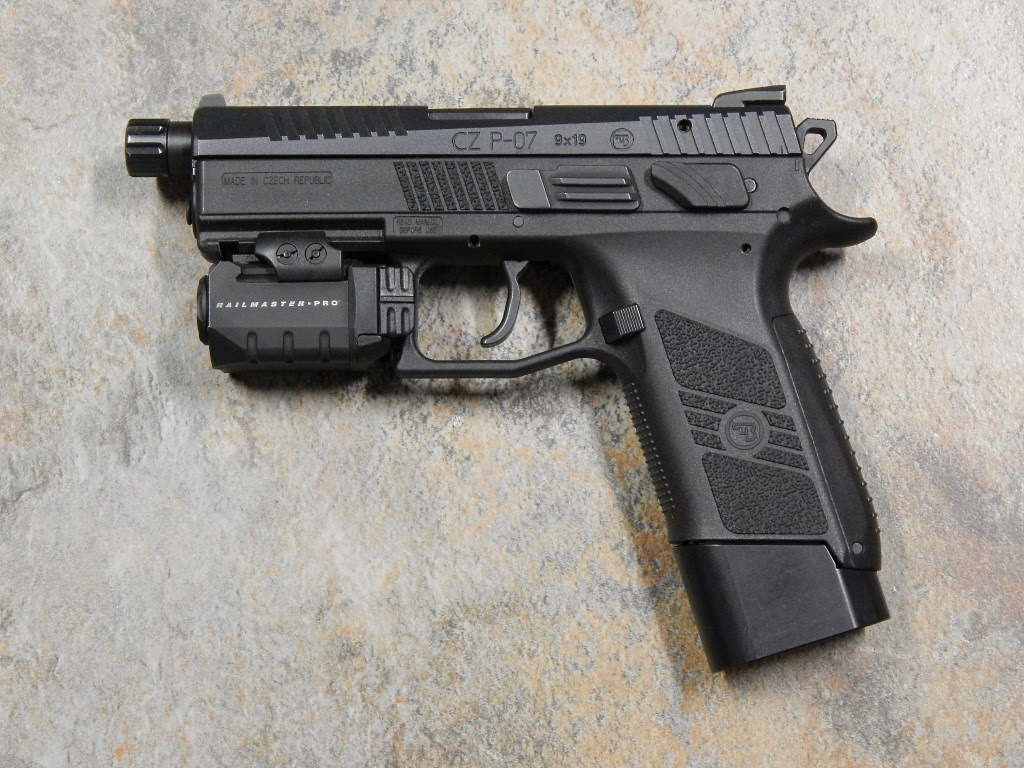 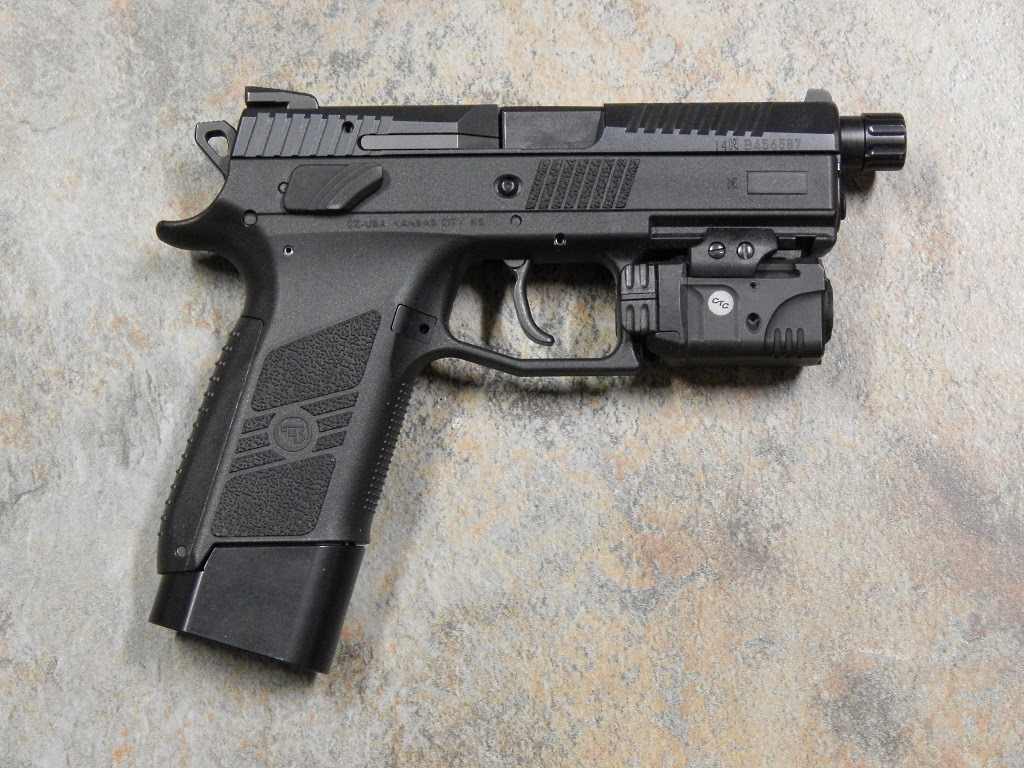 Video from today's "outlaw" action pistol match at the ShooterReady.biz outdoor action pistol range in Canyon, TX. This match was a combination of USPSA, IDPA, and Steel Challenge, which made it an absolute blast to shoot!  I placed 2nd out of 10 total. I was shooting my EAA/Tanfoglio Witness Elite Match with the 9mm top end. 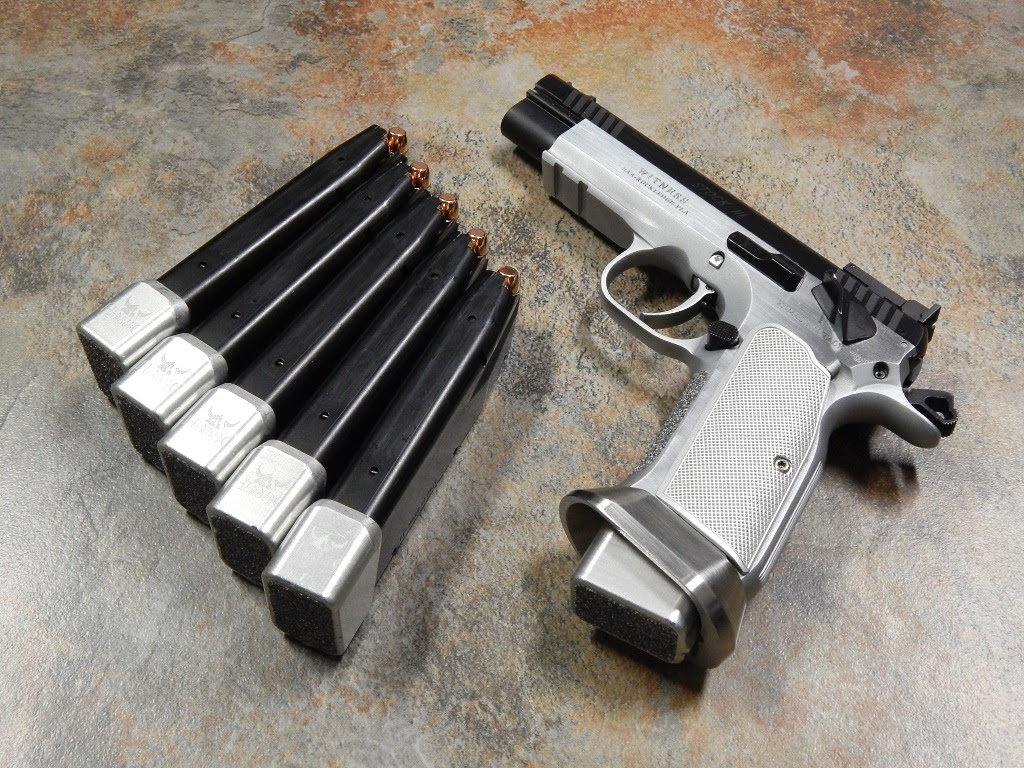 I've been a little frustrated with my performance at the IDPA action pistol matches that I attend when compared to my performance at USPSA matches.  Early on, I decided I would compete in the IDPA matches using my true-to-life everyday concealed carry style gear (a .45 ACP 1911 in an IWB holster and an un-tucked T-shirt for a concealment garment), but I recently realized that I am hindering myself too much by doing this. Afterall, IDPA is a game, and you've got to have the right gear if you want to perform well.  So, I made some changes. :-)  I'm now using my EAA/Tanfoglio Witness Elite Limited Pro in 9mm (in ESP Division) with a Blade-Tech kydex OWB holster, a 5.11 Tactical concealment vest, and a pair of Salomon Speedcross3 trail running shoes.

The Limited Pro in 9mm gives me several advantages over a .45 ACP 1911. The 9mm has much less recoil than .45 ACP, which allows for faster follow up shots. The Limited Pro is a double-stack platform, so the magazine well is wider for faster reloads and the use of an extended magwell is also allowed in the ESP Division. ESP also allows you to load your magazines to 10 rounds each versus only 8 rounds each for a .45 ACP 1911. Another advantage of this gun is when it goes to slide lock from an empty magazine, the slide goes forward automatically about 98% of the time when you slam in a new loaded magazine.  I don't think the gun is specifically designed to do this, but it sure is a nice inadvertent side effect when tenths of a second make a difference in this game.

The Blade-Tech OWB holster combined with the 5.11 Tactical vest (seemingly purpose built for IDPA) allows for a much quicker draw once the timer beeps as well as faster access to the extra magazines during reloads, and the Salomon shoes give me maximum traction on the dirt/gravel surfaces at outdoor matches.

The video below is from Saturday's IDPA action pistol match at the ShooterReady.biz outdoor action pistol range in Canyon, TX.  Unfortunately, I had a brain fart on the 5th stage and lost count of my shots on the first target (it required 6), and forgot that the following three targets required 3 shots each instead of the standard 2 shots.  I realized this and made up the shots, but still got two procedural penalties (one for the incorrect shot counts and one for not using cover properly when making up the shots).  This hurt my overall placement for the day (placed 4th out of 8 total), but I was extremely happy with my performance with the new gear.  Unfortunately, the best gear in the world won't prevent brain farts! :-) 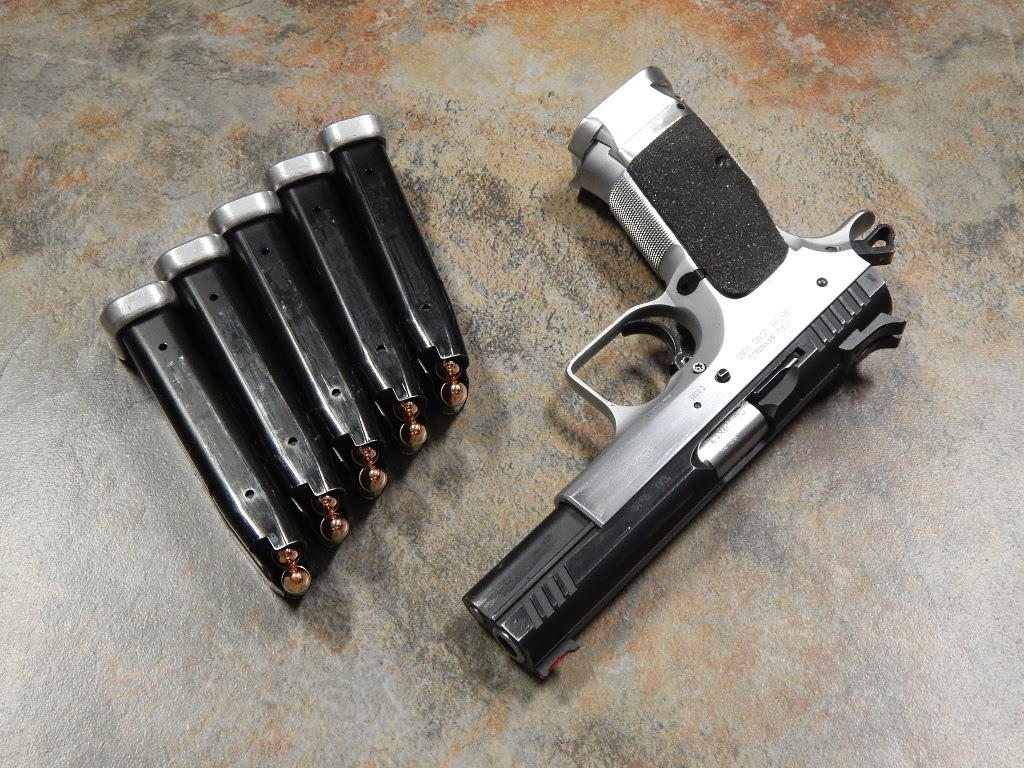 EAA/Tanfoglio Witness Elite Limited Pro
Posted by Chuck Brazeau at 7:22 AM No comments: