I've been very busy in December of 2020 as I decided to start my own small business making kydex holsters, mag carriers, and other custom items.  I've been making my own holsters for over 5 years and I've been slowly refining my holster making techniques.  About 2 years ago, I came up with a holster design that indexes on a Streamlight TLR-1 weapon mounted light rather than the gun itself so that I could use multiple guns in the same holster as I like to rotate through several different types of guns for concealed carry.  I'm on my 4th version of this type of holster, and I've fabricated my own custom modular mold so that I can make it for each of the popular fullsize weapon mounted lights that are wider than the frame of a gun (Streamlight, Surefire, Inforce, and Olight). I felt like this latest version was a good enough design that it would appeal to other people.  I will admit that it's probably not a large group of people that would be interested in it, but currently there are only two other companies that make this type of holster and those holsters aren't very aesthetically pleasing to the eye in my opinion.  I realize that it's not important for a holster to look good as long as it works well, but why not have a holster that works well and also looks good? I also came up with my own inside the waistband magazine carrier design a few years ago that I've been using every day that is a minimalist design and works universally for double stack and single stack magazines.  I'm on my 4th version of this type of magazine carrier as well, and I've recently incorporated a LOT of features into the design so that it would appeal to a large group of people as it is now reversible for inside the waistband and outside the waistband. I'm also making non-light bearing holsters for a select number of popular concealed carry guns, since the majority of people aren't as fanatical as I am about carrying a gun with a fullsize weapon mounted light every day. 😜

The company name is RFV Tactical. RFV stands for Ready For Violence as in... "always be Ready For Violence to happen".  I've spent the entire month of December making products for display/photo purposes for the new website and social media, and I've even managed to make a few holsters and mag carriers for customers too. I don't expect the business to take off quickly and keep me super busy, but over time I'm hoping that it will be something to keep me busy after I retire from my fulltime job in the telecommunications industry. 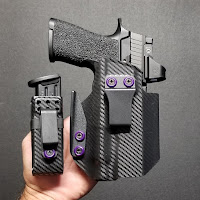 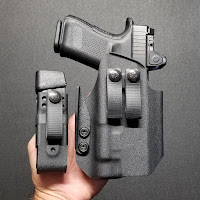 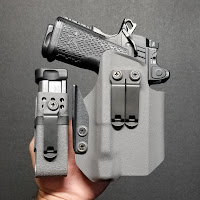 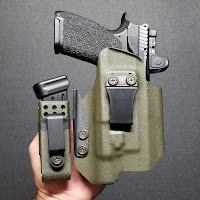 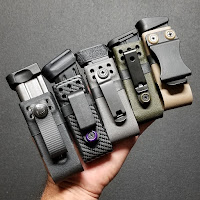 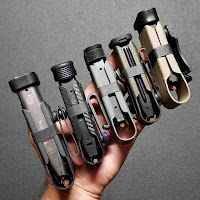 Posted by Chuck Brazeau at 7:08 AM No comments:

It's been a while since I've been to an outdoor IDPA action pistol match.  Due to Covid-19, our local matches have been pretty far and few between. I was shooting my new Bul Armory SAS II Tac Commander at this match after having a lot of troubles with it at the last IDPA match back in September.  That last match went so bad with gun troubles that I never even posted anything on this BLOG or published the video on YouTube!  Today's match went really well and I only had two instances of the trigger not resetting, but those absolutely could've been me short stroking the trigger. I ended up in 3rd place overall out of 14 total. I am going to embed both videos below so you can see the difference in the gun's performance.  By the way, both of these IDPA matches were half IDPA and half USPSA so that we could all enjoy the variety of both games at one match.

Posted by Chuck Brazeau at 3:41 PM No comments: