This was my first time shooting my new CZ-USA P-09 Urban Gray with a red dot sight on a milled slide at a USPSA match in the Carry Optics division.  I've shot my P-07 with a red dot sight in this division many times, but the recent rule changes now allow 141mm length mags with no capacity restrictions, so I put together a P-09 specifically for Carry Optics with a second slide that I acquired and sent off to CZ Custom to have milled with their multi-optic cut.  Unfortunately, I had problems with the Burris Fastfire 3 optic losing its zero while shooting each stage.  I later discovered that the locating dowels that I used to install the optic were slightly too short and were sliding up inside the holes in optic and allowing it to move around under recoil. Needless to say, my accuracy with the gun at this match was horrible.  I've got the problem fixed now, but trying to figure it out during the match proved to be very frustrating. Instead of walking the stages to figure out a good plan, I was in the safe area trying to figure out what was wrong with the sight. Despite the accuracy issues and one major jam on the first stage that cost me at least 9 seconds, I was really happy with the way the P-09 felt while shooting.  It felt like I was able to go a little faster with my splits and transitions than I was able to with the smaller optic equipped P-07 in previous matches. I'm looking forward to shooting this P-09 at future USPSA matches. 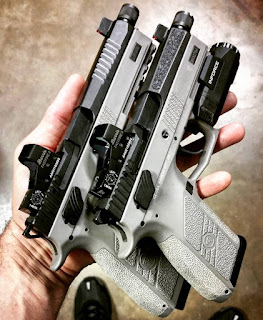 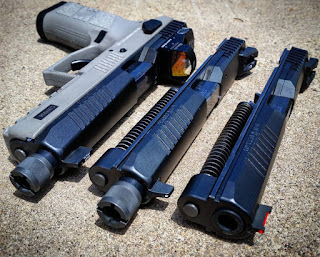 Three different top-ends for the P-09 Urban Gray
Posted by Chuck Brazeau at 5:11 PM No comments:

Another IDPA action pistol match with my CZ-USA CZ 75 SP-01. I didn't do as well as I would've liked at this match at the Amarillo Rifle and Pistol Club, but I still placed 4th out of 17 total.  My long distance shots are always horrible... I need to work on those! 😜

I went back to using my trusted CZ-USA CZ 75 SP-01 handgun at this IDPA match at the Shooter Ready Action Pistol Sports range in Canyon, TX.  This gun never disappoints me, and today it helped me take 1st place out of 18 total. 😎 Other than having some points down on the longer shots on stage 3, I was pretty happy with my performance.  Plus, I was shooting with both eyes open at this match and it worked out very well for me. I've been dry fire practicing a lot using both eyes open again, because I feel like it is the best way to shoot for self defense and with a red dot sight (pistol and rifle). To me, it just makes sense to shoot with both eyes open with iron sights, so I don't have to think about closing one eye unless I need to take the time to align the sights for shots farther than 20 yards.  This was actually the first time I've tried using both eyes open at an outdoor match and it is way easier to do outdoors than at an indoor range.

Posted by Chuck Brazeau at 2:17 PM No comments: