Another back to back weekend of shooting USPSA matches.  Today's match was at the Shooter Ready Action Pistol Sports outdoor range near Canyon, TX. I was shooting my EAA/Tanfoglio Witness Elite Match in .40 S&W and decided to shoot the remaining 75 rounds of high power self defense ammo from a carry gun that I no longer own. While this ammo resulted in more felt recoil than I am normally used to, I'm happy to report that I didn't have any malfunctions other than me not inserting a mag all the way in the gun during a reload (the mag dropped out while firing). I believe this was due to me loading one too many rounds in the mag. We had six stages with two classifier style short courses, and I sucked at both of those two stages. :-P I still managed to place 2nd out of our small group of 8 entries, so it was a good day for me.

I don't know if it was the heat or if I was just tired (maybe a combination of both), but I had several misses and no-shoot hits at today's USPSA action pistol match at Patriot Outdoors in Clovis, NM.  I ran my CZ 75 SP-01 in two divisions again (Production and Limited), but struggled with putting together good runs in either division.  I placed 4th and 5th out of 21 total.  At the start of the second stage, we had to throw a knife at a target before grabbing the gun off a barrel.  There was a prize up for grabs for the best throw, and I ended up winning a new HK folding knife. It's not a first place win, but I'll take it! :-) 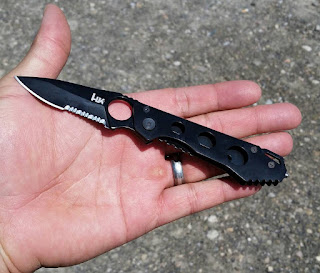 Posted by Chuck Brazeau at 8:34 PM No comments:

After what seemed like several years since we've been on the track (it's only been 9 months), we finally got back to Eagles Canyon Raceway near Decatur, TX for our first track day weekend of 2015.  The first day kicked our asses, but by the second day we were finally getting back in the groove.  On Saturday, Monica was riding her 2008 Ducati 1098, and I was riding her usual track bike which is a 2008 Honda CBR 600RR. On Sunday, we switched bikes and gave it another go.  Monica has decided that the 600RR is a much better bike for the track, and I agree 100%.  The Ducati 1098 is a handful to manage on the track. It's heavier and has a very sensitive throttle (not a good thing with that much power on tap).  I was finally getting the hang of it by the end of the day, but I was too hot and too tired to keep going.  We had a great time, and it was nice break from my action pistol shooting. :-)

Posted by Chuck Brazeau at 6:57 PM No comments:

I decided to go back to my Springfield Armory 1911 Trophy Match gun for tonight's IDPA indoor match at Texas Panhandle Pistol Club.  The Trophy Match was my first competition gun, but I eventually migrated away from it due to the higher recoil of .45 ACP (I don't reload my own ammo... yet), and the lower capacity of the single stack 1911.  I feel that a double stack 9mm pistol gives me a little better advantage in competition (see my revelation blog post here), but I recently picked up some re-manufactured ammo from Atlanta Arms that is downloaded to competition specs (170 PF), so the recoil isn't quite as bad as off-the-shelf factory ammo. Even though my performance was decent, I had one hit on a non-threat target, so I ended up in 3rd place out of 8 total.