After acquiring multiple compact 2011 handguns for my carry gun rotation, I decided that I needed a 2011 specifically for competition usage.  I picked up a Bul Armory SAS II Tac Commander from GP Arms for this task, and immediately went crazy modifying the crap out of the gun.  I replaced all the controls with stainless steel parts from Fusion Firearms and all the ignition parts with components from EGW. I sent the slide to Primary Machine to have it milled for a Trijicon SRO using their proprietary RMR/SRO mounting plate that doesn't have an integrated rear sight, so the SRO is mounted farther back on the slide and doesn't hang over the ejection port.  I am not aware of any companies that offer aftermarket front sights specifically for the Bul Armory guns, so I ordered a fiber optic front sight for a Kimber 1911 from Dawson Precision hoping that it would fit, but I had to custom fit it to the dovetail in the slide, which was a pain in the ass! I made a custom rear "iron" sight using 1/8" black pinstripe tape that is applied to the front of the optic window which co-witnesses with the new 0.360" tall front sight. I also installed the grip module and tactical magwell that came off of my STI Tac-Lite 4.0 2011 that I stippled, which was surprisingly not that difficult to install. Since this is basically a Frankenstein build with a mix-match of modified parts, it took quite a bit of troubleshooting and tuning to get this gun to run reliably.  Every time I would fix an issue, a new problem would pop up like a never ending domino effect.  Very frustrating for sure, but I've finally got the gun running reliably. 1911/2011 handguns are not legal in the Carry Optics division of USPSA, so I'm going to just run the gun in the Open division and have fun with it. I'll also be using it in the Open division of my local outlaw 3-Gun matches. 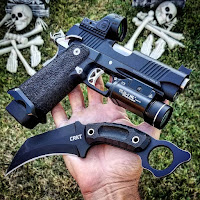 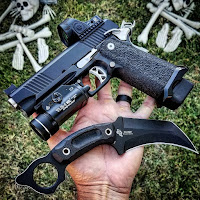 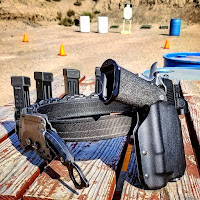 Unfortunately, changing to an STI grip module does not allow the gun to accept STI magazines as the metal frame of the gun also has to be permanently modified for that. Since extra factory Bul magazines were still unavailable when I purchased the gun, I'm using modified Remington 1911 R1 double stack magazines (same basic magazine tube as the Bul SAS II magazines) with Arredondo Plus-2 extended base pads for Para/Remington magazines (also modified to fit the STI grip module with a tactical magwell) for a 20-round capacity.  To get the magazines to work in the gun I had to increase the height of the magazine catch slot from 0.150" to 0.230" using a Dremel cut-off wheel and a small square file, and shave off just a small bit of material from the very top of the magazine to ensure that it doesn't drag on the underside of the slide. I also had to tune the feed lips of each magazine to get the gun to feed reliably, but this inadvertently resulted in the slide locking back with one round still in the magazine.  I tried trimming down the followers to resolve that issue, but I believe the enlarged mag catch slot introduced too much deviation to be 100% reliable, so I just modified the followers so that they don't lock the slide back at all.  Since the gun's intended usage is USPSA and 3-Gun where you rarely run the gun dry, I'd rather the magazine not lock the slide back when empty than have it lock back unexpectedly. If I absolutely need the slide to lock back on an empty magazine for a specific stage or scenario, then I'll just use the two factory magazines that came with the gun.