USPSA action pistol match at the Lead Farm shooting range in Lubbock, TX. I was shooting my Bul Armory SAS II Tac Commander that I recently updated by refinishing all the controls, hammer, and grip screws in black Cerakote, and I also reinstalled the factory grip module that I textured at RFV Tactical. I had a dumpster fire on the first stage as I went to war on the Texas Star spinning target that resulted in an unexpected flat-footed reload. For some damn reason I could not hit the plates on that thing to save my life, which is odd because I usually do pretty decent on them.  I also had a trigger reset issue on the same stage which may have spooked me by the time I arrived at the Star, but it was embarrassing none the less. I started to wonder if my red dot was not zeroed properly, but I was able to go 1 for 1 on a steel plate rack on the 4th stage that was the same distance away as the start with no problem. I suspect that the trigger reset issue was due to me simply not let the trigger out far enough to reset properly (aka - trigger freeze) as I do that occasionally with 1911/2011 style guns. The rest of the stages went okay with no more trigger reset issues, but the damage was done on the first stage.  I came in 8th place out of 38 total. 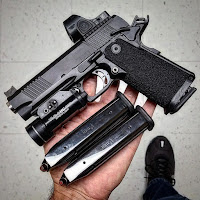 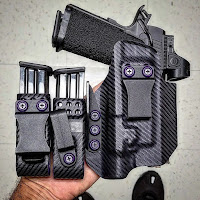 Posted by Chuck Brazeau at 2:09 PM